How to Localize for the Chinese Market: Mobile App UI Trends

General Trends in Mobile Design for the Chinese Market

The usage of mobile devices surpassed other ways to access the Internet long ago. Thus, in 2014 the number of Chinese users who got connected to the global network via a smartphone raised to 83,4% and it was greater than that of PC users for the first time. This figure is continuously growing towards mobile devices. That’s why developers in China approach mobile design and the development of apps more precisely and carefully. 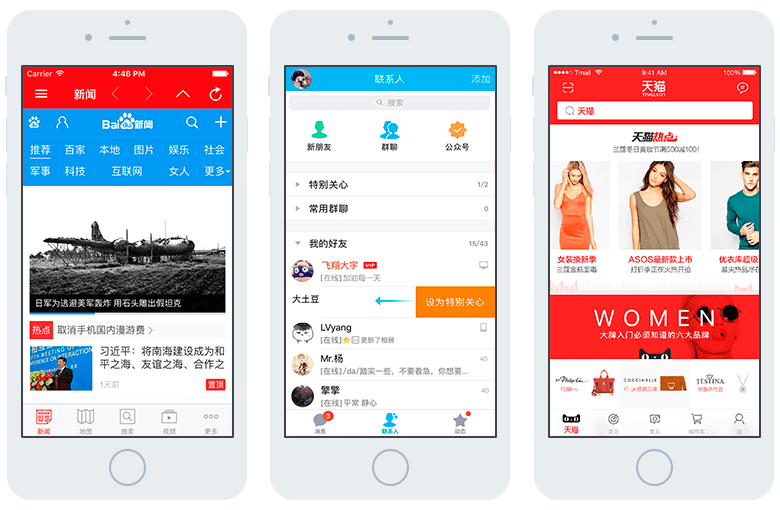 Everyone who deals with mobile and web app development for the Chinese market begins to think about design localization and adaptation to its conditions. The society is quite expressive and friendly there. This is reflected in Chinese mobile app UI trends by a lot of icons, cute and emotional characters, bright, vibrant, juicy and saturated colors, animated interface elements. Such peculiarities are observed even in financial applications like Alipay. 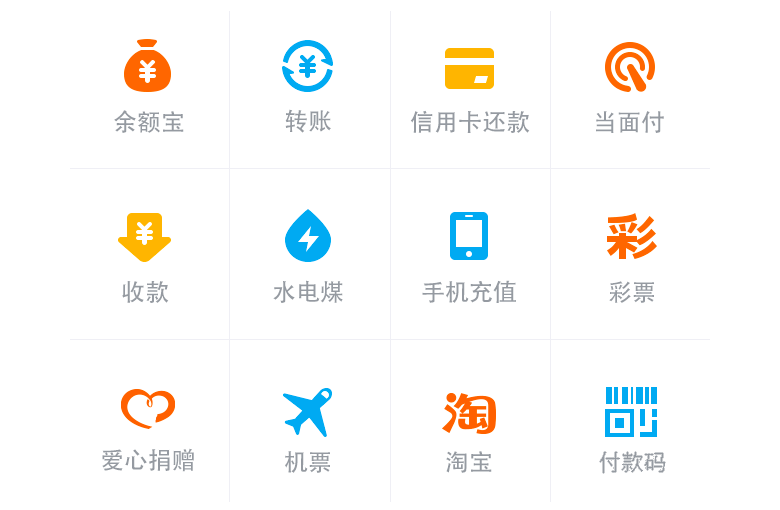 Adapting the UX and UI of your app to the Chinese market will require the consideration of a lot of factors and should also include its culture, language, and technological habits that differ from those of Western society.

Besides, when it comes to the vision of a Chinese professional designer, his opinion usually doesn’t matter, especially in large companies, where decisions are made by managers based on what works best rather than on what is cool and new. In view of such corporate ethics in China, designers rarely try to stand out and make something unique. But this tendency is declining and new experts are trying to create project design based on UX/UI global trends.

A lot of peculiarities, elements, and features in mobile applications for the Chinese market are strange and not quite understandable for users who have never seen them. For a startup that originates not from China but would like to become popular in the Celestial Empire, it is very important to learn general tips regarding local mobile app design trends to adapt its product correctly. Further, we will analyze them and see how to localize app design for Chinese users.

Chinese applications look strange for the Western world at first glance. We are accustomed to a certain structure of the text and information location for their easy perception and reading. Chinese user experience is a far cry from ours. People there are used to another form of data presentation in mobile design, as their language and characters are radically different. For example, one hieroglyph can have up to 60 doodles, and there are no indents and spaces between words.

Developers usually try to implement as many functions in a Chinese app as possible. For example, one application may contain chats, video calls, e-mail, as well as games, news, a billing system, electronic purse, music recognition and search, weather, a QR-reader and a variety of small additional features: an alarm clock, calendar, notes, etc. Despite overloading mobile design immensely, this is done to permanently keep a user in an application throughout the day from the moment of the morning wake-up call up to watching movies or videos in the evening. 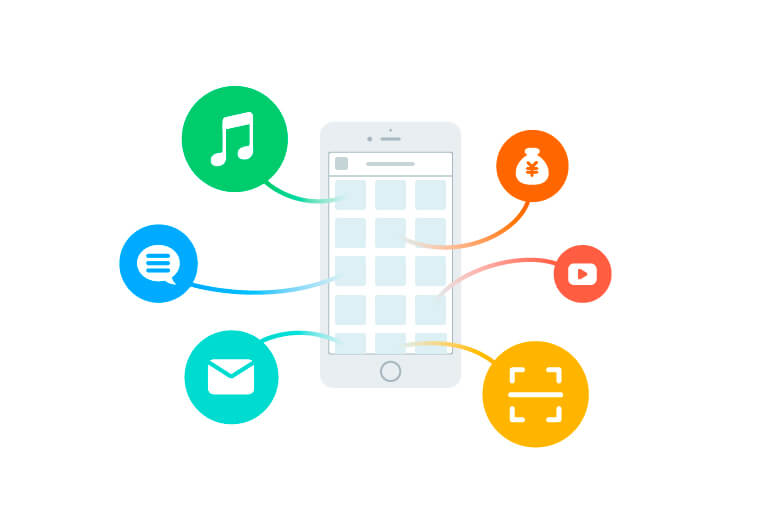 In Chinese apps, developers often allow users to change their visual interface mapping by selecting a custom theme or a color scheme they like. It is difficult to imagine in regard to the applications we are used to, as designers originally lay colors and tones in mobile design based on branding. Theme personalization can be found next to the icon in the form of a T-shirt. 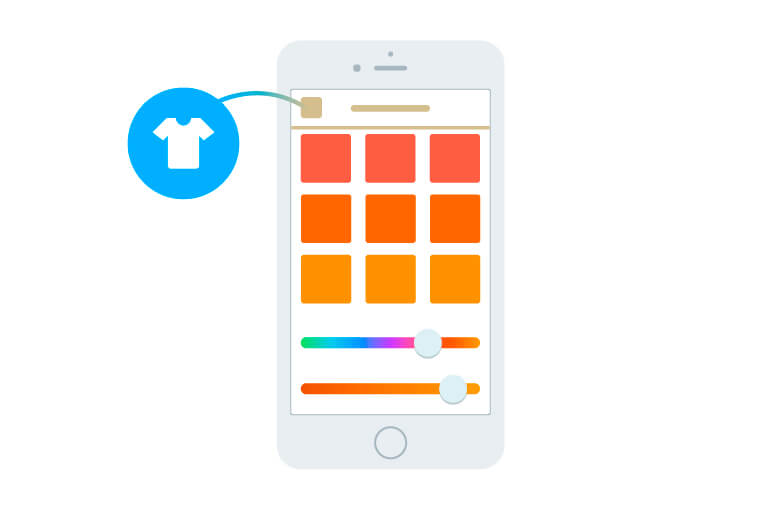 In the UI design of Chinese apps that are related to finance and paying for goods or services, you can see icons with a shield and text information that all your transactions are protected and your confidential information will not make it through to third parties. Such notifications are being long ago hidden on websites and in apps or made maximally unintrusive but for the Chinese, they should be noticeable and clearly visible. 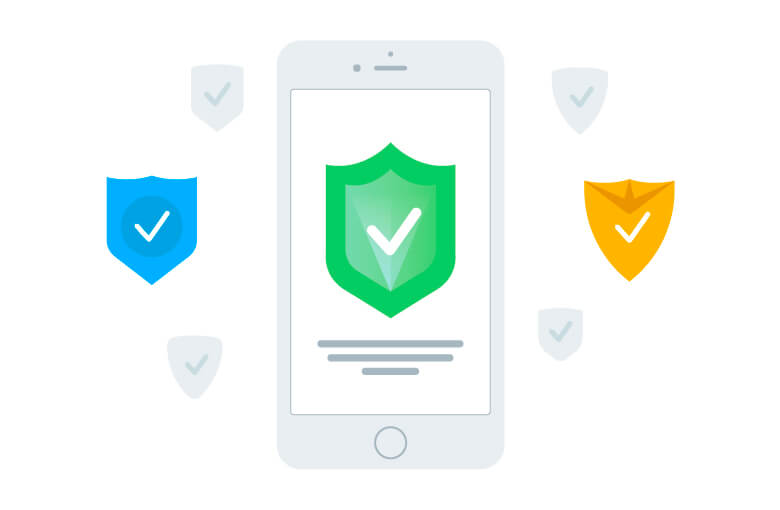 An icon in the form of a red circle is widely applied in the user interface of Chinese mobile apps. It is used to display the number of unread incoming messages or to indicate the latest news or updates, but without figures. There can be so many of these icons on a screen that sometimes a user doesn’t immediately understand what functional purpose they have. If an app is not opened for a long time, these red circles can appear simultaneously in many places, on several screens and elements. 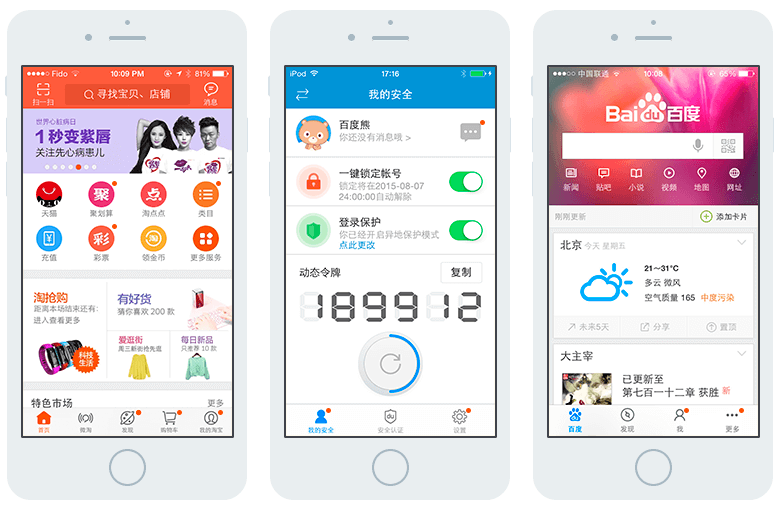 These icons can mean that:

It is typical of apps that a list with links can be grouped under the familiar icon in the form of three lines or dots and their variety, which is called "hamburger." In Chinese mobile app design, it is often located in the tab bar and named «Discover». A menu icon can have the form of a compass, steering wheel or magnifying glass. As a rule, it contains low-priority functions.

There is a user gradation by rating applied in the interface of Chinese apps. Social, business or financial applications have a bar or a badge displayed next to a user name or profile. It shows their rating or VIP membership in a service.

Among mobile app design trends in China, there is also one tightly connected with the problem of smog in major Chinese cities. It is a very important topic and some apps show an environmental pollution level of certain areas in their interface. This information is useful if you are going to take a walk. A widget will notify you when it is better to wear a respirator, and when not to go out at all.

Another funny icon is "Happy shopping bag" in the form of a package with a handle. It is used for trading functions. A lot of app interfaces house some store. If this is an application that records your time and speed as you run, it will sell shoes and accessories for this purpose. If an application is connected with music, you will be offered to buy headphones, etc.

Varieties and Peculiarities of Text Entering

There are several ways of entering text in the interface of Chinese apps. Each of them has its special characteristics and advantages. 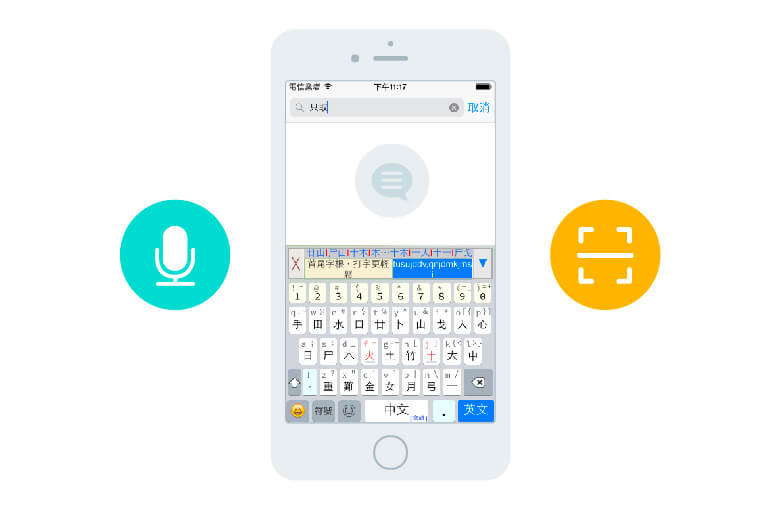 When entering text in mobile apps, the Chinese use several methods of typing characters and hieroglyphs, Pinyin being the most popular of them. In some applications, you can get the text in Chinese entering it in English.

IOS SDK allows developers to choose what action is done by the button in the lower right corner of the keyboard. A "Return" command in gray that inserts a line break is the most common option for users. This can also be a blue button with an action like “Search”, “Go” or “Send”. A command to send a message is usually brought away from the keyboard to the right of the text box.

Since the Chinese do not use a space when typing text, in every application with a chat the “Send a message” button should be located in the keyboard area instead of the usual line break command "Return".

Implementation of the voice message function is very common for Chinese mobile design. Voice control is much easier than manual text input, especially for the older audience, who do not always have sufficient skills to work with mobile applications and various ways of entering the set of Chinese hieroglyphs. At present, there is also a trend among users to exploit voice input for search queries instead of typing.

For the Chinese, in contrast to the rest of the world, QR codes have become quite a popular feature. These codes are placed everywhere and can be found on websites, in apps, restaurant menus, ads, advertisements, on business cards, in transport and the urban environment. A lot of companies and services develop and embed their own QR readers and methods of processing them into their applications.

There are several authentication types that are used for registration and logging in in the interface of Chinese mobile apps. Each of them is easy-to-use in its way and has some benefits. Here are a few types of authorization:

Some apps in China have a field to enter a captcha for registration, login, search or other fill-out forms, which traditionally belongs to website characteristics. The entry is usually displayed as distorted figures, but it is done differently in Chinese applications. Sometimes they offer to enter hieroglyphs or doodles, or select photos where certain items are shown.

Other Design Peculiarities of Chinese Applications

Unlike the rest of the world where emoji are popular, QQ service in China has set the trend for typing smiley icons. A great number of apps with chats borrow these emoticons. Animated stickers are also included in all applications, but they are less popular.

As well as a variety of smileys, one can also see a character with strong emotions in apps when loading them or being notified about an error.

This feature of mobile design originates from Japan and is used by a lot of Chinese video sites and applications. It is a button after tapping on which user comments appear moving chaotically on top of the screen, sometimes with animation effects.

As for now, China has not offered its own operating systems, structures, programming languages and open standards for the rest of the world yet. Although mobile design in this country looks unusual and cannot be called simple, technologies develop and open up new opportunities for various ideas.

Nevertheless, there are places where mobile design is even more complicated. While China is an interesting market, such regions as India and most of Africa are still far behind the advanced technology. Global internet penetration worldwide remains low. More and more people go online from the locations where apps and operating systems may not be similar to what we use today. They use technology and design principles to solve the same problems we do, based on similar needs but applying to different methods. Let’s observe what will happen next.

If you want to adapt your mobile app design for the Chinese market, hire an experienced company to do that. Your product performance depends greatly on its UX and UI, so they shouldn’t be compromised. Mind the above-stated mobile app design trends and you will build a devoted Chinese audience.

Need a design for your app?

We have talented and skilled designers who can create beautiful UX/UI designs for your project. Get in touch to learn more about our process and discuss your idea.

Rate this article
5.0/ 5 Based on 140 reviews
Lilia Udovychenko