We know about many web development languages that have been successfully used by developers and the software development team for quite a long time so far. The most popular of them are Python, PHP, and Ruby. However, recent years have brought a new technology that is being thoroughly discussed - the Elixir programming language.

Ever since Elixir programming began to gain traction, the efficiency and advantages of other back-end languages has been called into question. That said, is Elixir really so good?

We will try to answer this question in this article. Let’s learn more about what the Elixir language is, what it offers to developers, and what projects it can be used for.

What is Elixir Programming Language?

There is a group of people called the Elixir Core team that maintains the source code. The team consists of six members: José Valim, Eric Meadows-Jönsson, James Fish, Aleksei Magusev, Michał Muskała, and Andrea Leopardi. This fact is favorable for Elixir programming, because the team never changes the codebase until there is a shared understanding of the changes among all members.

Since 2012, there have been 96 Elixir releases. The latest stable release (version 1.7.3) was in August 2018. Even as a young programming language, Elixir already shows good results in its repository. See for yourself:

The comparison above shows that the Elixir programming language is being developed actively and its community is growing step by step.

To have a better understanding of Elixir, it is necessary to devote some time to Erlang.

Erlang is also a general-purpose functional programming language and was created by Ericson to be used for the development of telephone applications. This purpose of use speaks for itself. To ensure the continuous function of said apps, a platform should be stable, concurrent, fault-tolerant, and should support software updates on the go (hot code upgrade). Since 1986 (the year Erlang first appeared), this functional language has been coping with this task and demonstrating its battle-proven nature and reliability.

You might then ask why developers don’t choose Erlang for back-end programming. Compared to other web programming languages, its syntax is very unusual and its frameworks, tools, and packages are more complicated.

In any case, there is Elixir, which belongs to Erlang VM languages and was created by a Ruby developer. This means that Elixir programming offers a mix of benefits from both coding languages: its syntax is similar to that of Ruby and it has access to all the features of the mature Erlang system. Elixir and Erlang also have different systems of package management and other system tools.

What is Phoenix Framework and How Does It Relate to Elixir?

One more term that requires some clarification is Phoenix - a web development framework that is written in Elixir and is used for Elixir programming.

As with Elixir, Phoenix framework also runs on Erlang VM (BEAM). This means that Phoenix receives all the benefits of Erlang as well.

The main characteristics of Phoenix are:

Phoenix web framework is often compared to Ruby on Rails, and not without good reason. These popular web development frameworks seem to be competitors now, as many developers try to compare them and decide which one is best.

Leveraging the Elixir programming language and its Phoenix framework has a number of advantages for projects and the development process:

Speed
Elixir and Phoenix are fast. For example, tests of Elixir’s performance show much better results during software testing services than those for Ruby, and Phoenix response times are measured in microseconds. Impressive, isn’t it? Speed matters a lot when we speak about user experience. It is great to see that the app reacts and responds quickly to all actions. Additionally, good performance helps to save energy and money.

Reliability
This is one of the strong sides of Erlang that is also available for Elixir. Erlang is called a battle-proven programming language, thus there is no reason to doubt the reliability of Elixir programming as well.

Concurrency
In software development, concurrency means the ability to run multiple processes simultaneously but keep them independent of one another. Elixir and Erlang are characterized by a high concurrency.

Productivity
The speed of development in Elixir programming is good. Due to Elixir’s syntax, it is easy to write clean and understandable code without sacrificing the productivity of a developer.

An Elixir/Phoenix application has many nodes that work concurrently. In the first case, an error in one node will not influence the rest of nodes. The system will notify them about the issue and they will rearrange their work correspondingly.

Due to the compiled nature of the Elixir programming language, an app built with its help won’t start if there are mistakes in Elixir code. To handle the second type of issue and make sure that an app will work, the Erlang VM isolates modules where mistakes occur and restarts them in isolation. This process prevents the whole system from going down.

Scalability
Elixir programming is a perfect choice for applications that have many users or for those that are actively growing their audience. Elixir can easily handle a lot of traffic without extra costs for additional servers and the creation of efficient DevOps solutions.

The disadvantages of Elixir are:

Smaller ecosystem and community
As the Elixir language is comparatively new, its community and the number of libraries and tools available for Elixir developers are still fewer in number than those of other popular programming languages. More time is needed for Elixir to catch up with them, and it certainly will.

What Projects Can Leverage Elixir Development?

Elixir functional programming can be utilized for various projects. The main advantage of Elixir in this regard is that it doesn’t serve any particular niche. This coding language, along with its Phoenix framework, can be used to build applications for any industry.

You can hire Elixir developers to create applications with any set of features and degree of complexity, but there are cases wherein Elixir programming is the most reasonable choice both strategically and financially. To be more specific, it is a good fit for the projects that need to have the following characteristics:

Want to get technical consultation in building your app with the help of Elixir?

Drop us a line with your project idea so we can provide you with detailed feedback regarding its development, technical aspects, and utilization of the Elixir programming language.

Get your free consultation

Elixir Popularity: Is the Language Worth Using?

Since the first release of the Elixir programming language, its popularity has grown steadily. Look at the worldwide rising tendency from Google Trends over the past 5 years:

In 2017, Elixir was one of the most loved programming languages according to the Developer Survey done by Stack Overflow. 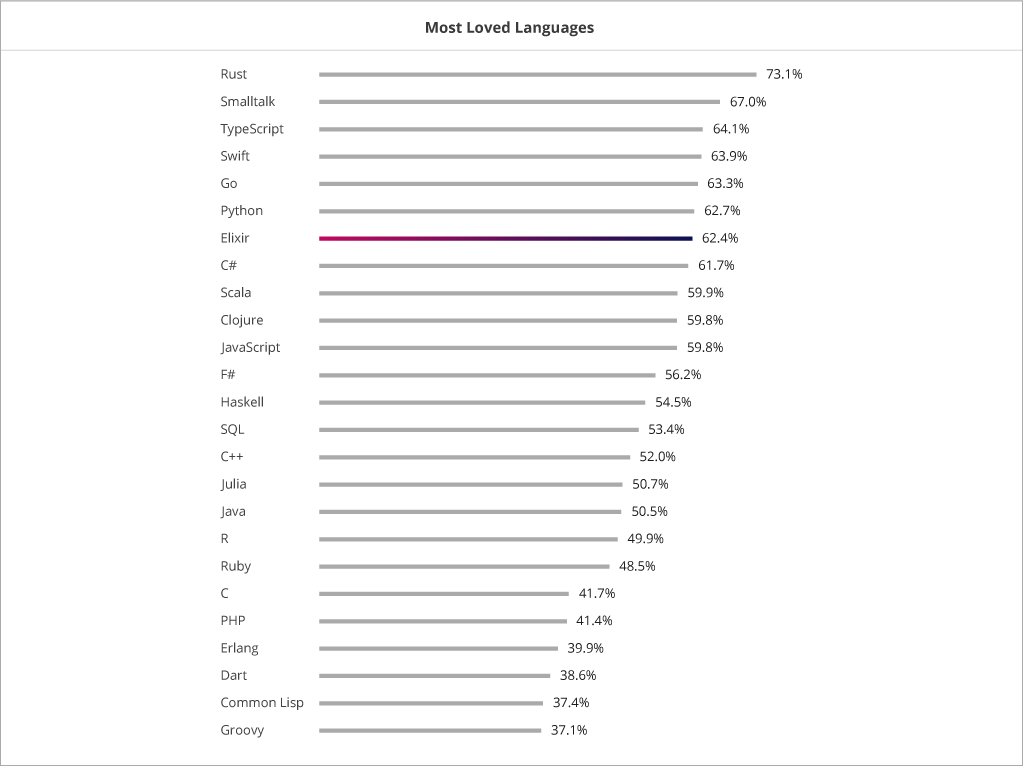 Elixir Popularity in 2017 by Stack Overflow

Let’s analyze some good uses of the Elixir programming language.

Who Already Uses the Elixir Language?

Naturally, it is too early to qualify Elixir as one of the most popular programming languages, but its adoption continues to grow. Thus far, the variety of companies who have already switched to Elixir ranges from popular platforms and applications to government websites.

That said, what big projects use Elixir? Among the well-known Elixir adopters are Pinterest, Postmates, and Bleacher Report.

Pinterest is a popular social network for people who are looking for inspiration and motivation through pictures and videos. The app’s monthly user count is measured in millions, making the load extremely high. Pinterest used Elixir programming to implement their notification system and, as a result, its code size went down from 10,000 lines to just 1,000. Additionally, they also cut down the need for server capacity by half.

Bleacher Report is a popular US sports news website. The site was initially built with Ruby on Rails, but it eventually became clear that Rails did not allow them to scale the system any further. At that point, they decided to migrate to the Elixir language. This decision saved the company a lot of money they could have spent on servers and tools. Instead of using 150 servers with Rails, they ended up with only 5 Elixir servers. Impressive, isn’t it?

Postmates is actively adopting Elixir web development for various app systems and even describes their Elixir use in articles and contributes Elixir-based libraries to open source.

If you were to ask developers about the things that contribute to programmer happiness, they would probably tell you the following:

The question is: can Elixir programming ensure all these important things? Let’s analyze.

This short Elixir language review, based on the key constituents of programmers’ happiness, shows that developers have no reason to dislike this technology.

Interest in Elixir Development in 2018

Although Elixir is still not featured among the most used used programming languages in 2018, its potential is strong. Judging by the number of Elixir conferences in 2018 and the number of attendees that is growing from year to year, developers and companies are keeping their eyes on Elixir.

One of the most popular conferences for those who want to learn Elixir and improve their skills is ElixirConf. It is held yearly on two continents: one in the US, and another in Europe. ElixirConf brings the community together, promotes the Elixir programming language, and provides opportunities for networking and establishing good relationships between attendees. ElixirConf’s popularity is growing and, thus, the popularity of Elixir programming and this positive trend will definitely continue.

There are a few more big Elixir events in 2018, so keep watching and stay tuned for the news.

Use Elixir and Phoenix

As the Elixir programming language and the Phoenix framework gain more and more popularity, and the feedback from developers who have tried these technologies remains positive, we have no other choice but to research them further.

The benefits of Elixir programming are impressive, and its positions are strong enough to make it clear that it will not disappear off the radar. It is high time to try Elixir. Are you in?

Want to try Elixir for your project?

Contact our team to learn more about the new opportunities for your app and let’s make it extremely productive and stable!

Rate this article
4.99/ 5 Based on 2549 reviews
Discuss your business and tech needs
Book a consultation now
Related articles

What is Ruby on Rails Used for: Tips from Back-End Developers

Elixir vs. Ruby and Phoenix vs. Rails: What to Choose and Why