How to Make a Music Identification App Like Shazam?

If you are not prepared to go to superhuman levels that are beyond rationality to realize your dream, then your chance of finding success is virtually zero.

Do you remember the times when you were humming the half-remembered song and asking every friend of yours to recognize it? Or the times when you passionately googled the lyrics hoping to find that earworm? Or maybe you still google them? If so, you should know about Shazam.

When I was a child, I dreamt of having the magic power to identify every song I heard. Chris Barton and his co-founders made my dream come true. And I guess not only mine but of thousands of other people all around the world.

The idea to develop a music identification app wasn’t brand new. Before Shazam, several companies tried to cope with such a task. But their approach was not as efficient as Shazam’s because they limited song identification to several radio stations. So users had to enter the exact time they heard the song and the name of the radio station to find out what song was playing.

Shazam was launched in 2002 as 2580 service. Why 2580? That was the phone number people dialed to get the music recognized. After a call, which lasted only 30 seconds, the user received SMS with a song title and artist name. With the launch of Apple App Store and Google Play, 2580 introduced Shazam app which quickly knocked a lot of users in the aisles.

Let us try to unveil the music identification app development by analyzing Shazam and its main competitors.

Lots of people were wondering how Shazam works its magic. Especially when taking to attention the way it conquers noise and easily recognizes songs even in the crowded places. After Avery Li-Chung Wang, one of Shazam co-founders, published his academic paper explaining how music identification works, Shazam’s super power was revealed. Its secret lies in ignoring almost everything in a song and concentrating on three dimensions of music: amplitude, frequency and time. As a result, each song has a spectrogram divided into a number of small pieces, called fingerprints. There are more than 11 million songs, and the database expands with new songs every day.

The process of song recognition goes the following way: 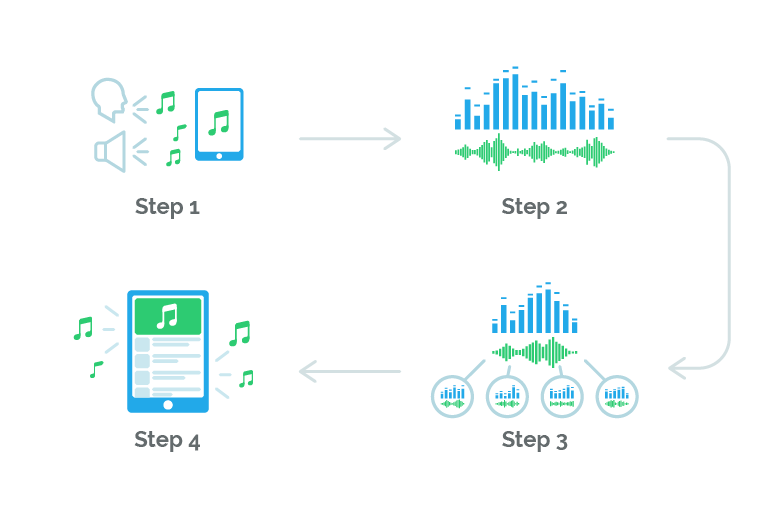 The Process of Song Recognition

Shazam has been the only game in town for almost a decade, but things changed in 2011 with the announcement of EchoPrint API by Echo Nest. It was a turning point that led to a new generation of music identification apps and music recognition technologies. For example, in the meantime, a US company GraceNote publicly shared its API together with the introduction of its own music recognition app called MusicID (which was originally developed as a CD track identification system).

So, how to make a music identification app like Shazam for iOS or Android? Let us try to answer this question by analyzing apps for identifying songs and their main features.

Of course, music identification comes first. For this purpose, you can use solutions developed by either EchoNest (EchoPrint API) or GraceNote. Another way is to develop your own recognition algorithm (luckily there are a lot of tutorials for that). But songs recognition is not the only feature which should be in your app. Usually, people spend 30-40 seconds on identifying music so there should be something to entertain them or make them open your app not only for finding the name of the song they are listening to.

In such kind of applications, design plays a very important role, as it is one of the inciting factors which attract users to use your app. Shazam, SoundHound, and TrackID have their own so-called animated voice recognition circles so to catch up with them you should invent your own recognition element.

Making an app social is always the right choice. It can be achieved by the news feed showing the most popular songs (by genre, country), top trending songs, most searchable songs, recent news in the music industry or everything which comes to your mind (and which is feasible, of course).

For example, Shazam has a feed consisting of the songs Shazamed by top celebrities.

It is not a must-have feature, but it will be useful not to lose any music you looked up. Every search you performed will be saved to your account and can be accessed from any device everywhere.

Additionally, it is no surprise that almost every app has a sharing feature. Such a small social element can play a good deal and promote your app or bring new users.

Shazam and Soundhound have this feature but its best implementation definitely belongs to TrackID. Powered by Spotify, it guides users through interactive map not only showing but also giving the ability to listen to what people are searching for and listening to at the moment. 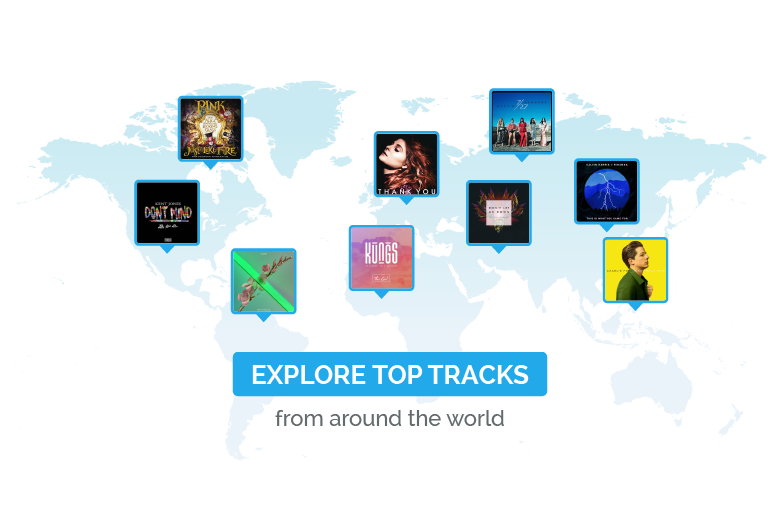 First versions of Shazam had only information about the artist, title, and album of the song. Since that times music industry has evolved and such apps like Shazam and SoundHound also improved and extended their features. So now, for example in Shazam, users can:

Redirecting users to Google Play or App Store to buy the song or a YouTube reference to check the latest music video of the musician can also make users stay in your app for more than just 30 seconds:)

Shazam, SoundHound and TrackID not only work online but also support offline search. So, if you have no internet connection, the search is saved on your device and is made as soon as the connection is renewed.

How to Stand Out from the Crowd

Having read this, you may wonder how to differentiate your app from others. In order not to develop a Shazam clone or just another unnoticeable music identification app, think of implementing some unique killer features into your app, something that will make users choose your app over the competitors.

Let us discover what killer features these top 3 music recognition apps have.

Being a pioneer in this sphere, it still remains one of the world’s most popular apps. No wonder that it is used by more than 100 million people each month to identify music, get song lyrics, and recently, also to discover the music that artists discover themselves. According to Techradar.com "Shazam is an app that feels like magic".

To remain the number one, it must invent and implement some new one-of-a-kind features. The freshest are: 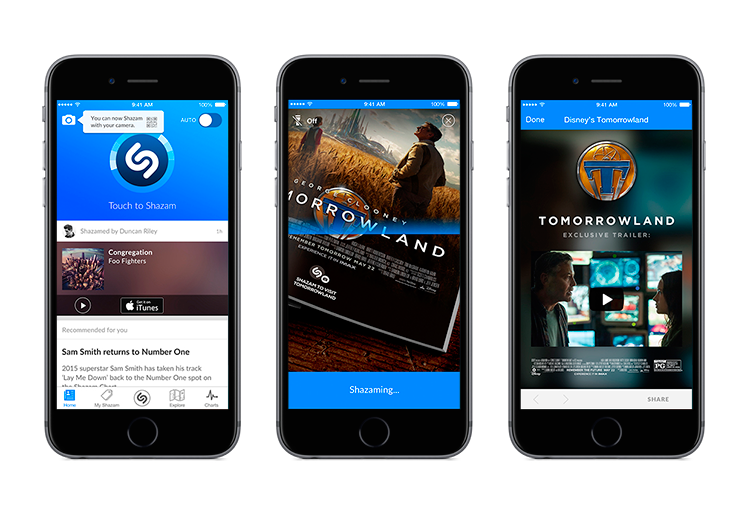 SoundHound is the biggest Shazam’s competitor, and it doesn't stay behind due to its unique sing and hum search technology which is almost bordering on fantasy. No matter whether you are singing bass or baritone, whether you have a sore throat or running nose, SoundHound is always there for you to recognize your half-remembered chorus.

Founded in 2005 by Keyvan Mohajer as Midomi Ultra App, it was shortly rebranded as SoundHound. It also got the better end of Shazam and became the first music recognition product available as a wearable and the first shipped in autos (partnership with Hyundai). 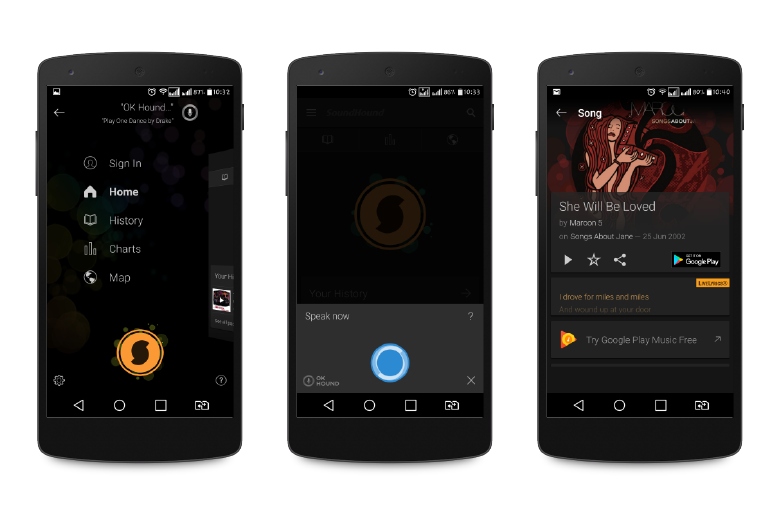 Developed by Sony Mobile and powered by GraceNote and Spotify, it was not so long ago released and currently is only available on Android devices. Unlike SoundHound and Shazam, it lays emphasis not on functionality but rather on stylish, fresh design and availability (translated into 60 languages). Those are probably the killer features of TrackID. Its design is fairly sleek, simple, and not overloaded by lots of different elements and functions. One of its one-of-a-kind functions is surely live music map which makes the app worth installing. 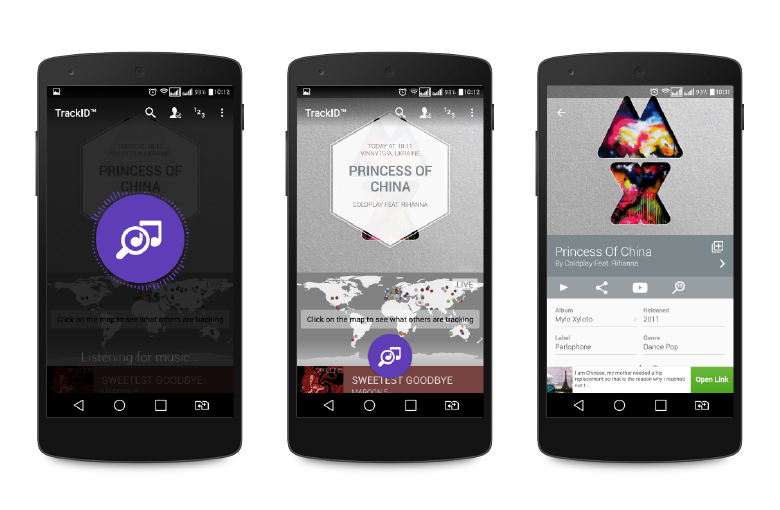 There are some more Shazam-like apps, such as SoundID, Music Identification, Musixmatch and others which focus on either design or have music identification as a secondary function.

One more example of a new app like Shazam is a Startup Warble, which was called “Shazam for birds” by its followers. Warble was developed by two scientists, Florence Wilkinson and Dan Stowell and launched in 2015 with the capacity to identify songs and chirps of 220 British birds.

It utilizes almost the same algorithm but with some tweaks as birds songs and tweets are sung with varying speeds and cadences, so it can be really tricky to find the “artist”. Currently, it is in the fundraising stage and it’s founders are planning to launch a North American version in the nearest future. 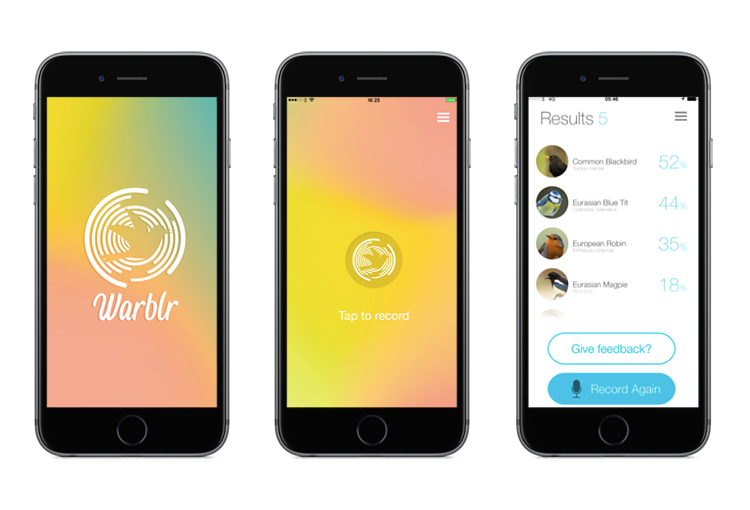 Despite being recently launched, this project already has a competitor called BirdGenie developed by Princeton University. It is promised to be released by the end of summer - beginning of Autumn 2016.

How to Get the Ball Rolling

If you want to create a music identification app for Android, iOS or even Windows Phone you may wonder how much it could cost and how to get some profit out of it.

Firstly, let’s speak about the price. It can vary greatly depending on many factors such as:

Taking into account the Lean Startup approach together with our experience it is strongly recommended that the development of the first version of the app (MVP) should not take more than 4 months. In other cases, it may be not efficient as while you’ll be bringing up your idea, someone can launch a very similar app.  Do not neglect to apply proper software testing services, including beta testing, before app launch on the market.

Mode detailed information about MVP app building can be read in the article:
8 Minimum Viable Product Examples to Start a Digital Business.

Speaking of the profit, you should note that in such kind of apps it is hard to sell something. So how to get some profit? Let us get back to Shazam once again. It can truly be considered as a master of making money in this field. Unlike many other apps it has two different versions - Shazam and Shazam Encore. The first one is free but it has those annoying in-app advertisements (actually they bring profit). The second one, which was launched several years after the release of the free version, has no in-app advertisements but requires $6.99 payment to be installed. That is one of possible good approaches for such kind of apps.

If you are staying at the crossroads of creating a music app like Shazam, SoundHound or TrackID, you should understand that it is hard to compete with such big players. Also keep in mind that Shazam as well as SoundHound received solid investments in the first round and as for the TrackID, it  was developed by a world known company Sony.

Songs determination here is just a piece of the puzzle and in order to succeed the whole app should function flawlessly. It's important that your Shazam-like application should bring some unique value to the users, make their life easier and entertain them. So, as you can see, another clone of world’s popular app won’t work as an idea for a startup. Instead, you can analyze the market, utilize different business analysis services in the current music app market, and develop unique and value-giving software ideas.

The first thing you should do is build a detailed business strategy and think of the ways you can enter the market. Big things often have small beginnings, so who knows, maybe your app will make Shazam whistle in the dark.

Feel free to reach out to our team so we can help you with the idea finalization and further strategy.

Rate this article
4.99/ 5 Based on 1447 reviews
Discuss your business and tech needs
Book a consultation now
Related articles

How to Build a Healthcare App: Types, Trends, Costs & Features

How to Make an App Like Uber: Updated Guide