The world changes so rapidly that everyone and everything have to keep up with the tempo not to be aside. This global and common truth can be fairly applied to app development too. One would hardly find entrepreneurs who don’t care about the time needed to build their projects. So, what can help in this regard?

The answer is frameworks. You know what this word literally means, right? It has approximately the same meaning in terms of development. There is a programming language to write code with but it is not an option to be used purely. If developers go this way it usually takes a lot of time and efforts. It is much easier and faster to wrap this language in a shell with stable architecture which contains a great number of libraries, plugins, and other solutions. Such approach has great advantages making code shorter, cleaner and more readable.

The variety of frameworks for each development platform is huge. It’s impossible to describe all of them and is, probably, not necessary too. Let’s narrow down our choice.

As almost every company tends to have a website or at least a landing page, it would be good to review the most popular JavaScript frameworks. These are Angular.js, Backbone.js, React.js, Ember.js, Aurelia.js.

Before describing each framework separately, it should be noted that they have some things in common. First of all, they all use JavaScript as a programming language which is very obvious. The second peculiarity is the MVC (model-view-controller) based work. This architectural pattern helps to clearly separate the user interface from application logic.

Now, let’s analyze the frameworks along with their pros and cons.

The framework was released in 2009 what makes it quite old. In spite of this, it seems to be the most beloved JavaScript web framework for building single page applications. It is available as an open source solution and is supported by Google. The latter is a convincing argument in favor of Angular to become a front-end solution for a web app.

Among its popular users are GoDaddy, Forbes, Udemy, Ford, The Oscars, NBA, etc. The top countries where the framework is being searched are India, Belarus, Sri Lanka, Israel, Bangladesh.

Backbone.js first saw the world in 2010. Its authors initially positioned it as lightweight and so it is until now. Probably, this is the main reason why it belongs to the best Javascript frameworks.

The name really reflects the core functionality that is good for either simple or complex web applications. This reputation is supported by Backbone’s biggest users, such as Foursquare, Pinterest, Kanban Tool, Sony Entertainment Network. The framework is available open-source and is quite easy to learn. It is most searched in India, Ukraine, United States, Canada, and Japan.

If you like the user interface of Facebook and Instagram then you might like React.js too. This very framework is behind the front-end scenes of the two social giants. There are other companies that benefit from using it: Atlassian, BBC, Coursera, Dropbox, Flipboard, Netflix, Paypal, WhatsApp.

React.js was created by the team of Facebook developers and came out in 2013. Being pretty new in comparison with other JavaScript frameworks it confidently wins its niche. Countries with the highest interest in it include Singapore, Philippines, Norway, Czech Republic, and the United States.

Introduced in 2011 this open-source JavaScript framework was named the best in 2015. Its closest competitors are Angular and React. Ember could be a good solution for a startup or for a business looking to build complex web apps.

Ember community is quite big and active. The framework itself seems not to disappoint its followers. It is being constantly updated and changes are introduced pretty often. Its advantages have been appreciated by Yahoo, ZenDesk, Groupon, TED, Microsoft, KickStarter and so on. People from Canada, India, the United States, Germany, and the United Kingdom have the strongest relevant search habit.

Aurelia is a child of 2015. It is an official open-source product of Durandal that is famous for creating various tools, libraries, and frameworks. The reputation of its creators speaks for itself, so you can be sure that it will be under professional guidance. The community of experts will take care of that.

Being very young Aurelia.js has already earned a place in the ranking of the best JavaScript frameworks for promising perspectives. Developers observe its progress precisely and some of them try to build first web apps with it. The most interested searchers of Aurelia.js live in the United States, India, Poland, Bangladesh, and Finland.

As you see all mentioned frameworks have a lot of things in common. There are, of course, differences that make them special and also matter to those who are trying to find the best option for web app development. Let’s generalize some basic information for JavaScript framework comparison to understand the state of things even more clearly. 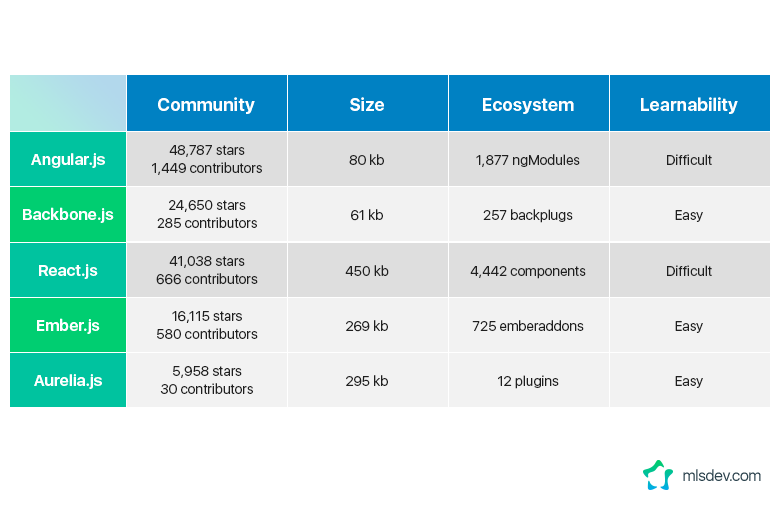 In addition to the above data we could analyze general interest to the frameworks over time according to Google: 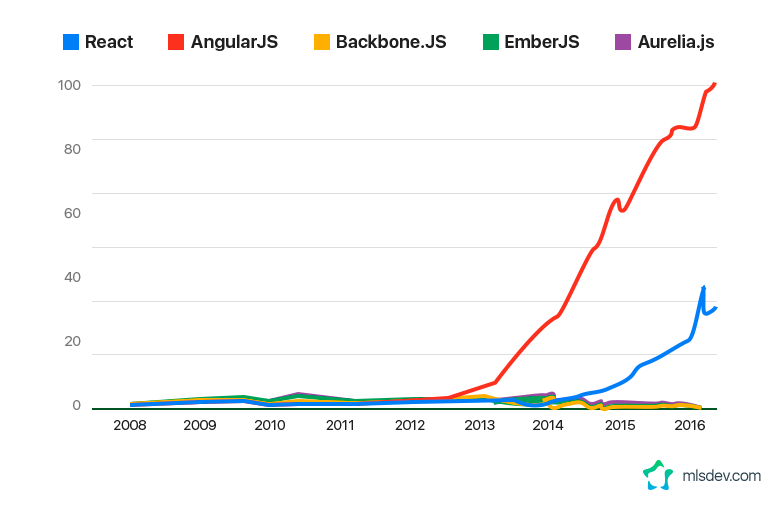 General Interest to Framework over Time according to Google

Not a surprise to see Angular, marked in red, beat its competitors in the contest. This framework still remains the most popular among developers.

The Last But Not Least

All these frameworks are used to make the user interface of your web app work fine and smoothly. In spite of this common aim, none of them can be called the best JavaScript UI framework. It would be not correct to say so because there is much more to be considered.

There is also no best JavaScript frameworks for mobile development. Each of them can show all its powers and productivity only when used for building web applications. If you are planning to develop a mobile app it is better to go with native solutions on iOS and/or Android.

The list of the best JavaScript frameworks is not limited to five only. This quick overview is aimed at helping you out in case you need to decide upon one of them. It is, of course, not easy but still possible if to rely on the facts and some advice of experts you hire to build a desired web application.

No matter what framework you choose, we hope that your project will get the most out of it and be a success.

Rate this article
5.0/ 5 Based on 151 reviews
Lilia Udovychenko

AngularJS vs. ReactJS Comparison. What to Choose?