AngularJS vs. ReactJS Comparison. What to Choose?

If your company needs a website for business you probably have to choose a JavaScript framework for its development. It is not an easy task considering a great variety of them. Of course, this diversity can be narrowed down to a list of the best frameworks that significantly simplifies the whole process. Nevertheless, only one of them has to be a leader to turn the approved design of your web project into a fully functional website or SPA.

We have decided to help you out and defined two most severe competitors in this battle. One of them will become the winner. So, we will explain what stands behind AngularJS and ReactJS popularity and makes them obvious favorites in the world of front-end development at the time being. Let's try to analyze them objectively.

The framework appeared in 2009. Since one of its developers, Misko Hevery, became a Google employee, it is actively supported by Google now.

Let’s take a look at the pros and cons of AngularJS. Among its key advantages are:

Apart from offering the above-listed benefits, AngularJS has a few disadvantages. It can complicate the work of search engine crawlers, but this inconvenience is temporary and one can eliminate it with the help of a couple of simple solutions. The framework may also cause some debugging difficulties and requires good background knowledge to be efficiently used in projects.

This library was created by a Facebook engineer Jordan Walke. The first OS release took place in May 2013. It is actively supported by Facebook and Instagram. ReactJS implements the idea of web components that extend an HTML document.

It would be fair to consider the pros and cons of ReactJS as we have done it for its opponent. So, the key features are:

Providing these advantages, ReactJS can also cause some difficulties. They are mostly connected with mastering this framework as there is not enough documentation on it. In addition, it requires experience from a developer to be able to choose and apply third-party libraries as it is not fully-featured. So, keep it in mind when you hire a front-end software engineer who works with React.

If AngularJS is a framework, and in the second version it is already a platform, would it be correct to compare it with a library? Now, there are well-established bunches of libraries (react, react-route, redux, react-redux) that allow you to create full-fledged SPAs. So, it is quite fair to keep comparing AngularJS to ReactJS as ecosystems, or the ways to build web applications.

We will compare React.js with AngularJS 2 as it is much more progressive. Even in version 1.5 its developers actively encourage us to use the approach the second version is based on.

In fact, AngularJS 2 evolved from a framework to a platform. You can easily use its components with other frameworks. Additional functionality may be implemented just as in the form of components that accomplish it completely, so as directives that extend the functionality of the existing component.

To avoid performance problems, Angular offers three types of binding: two-way, one-way from data source to view target and one-way from view target to data source. This allows you to build a logical and easy-to-maintain connection between the data view and the model.

Although most of its developers use TypeScript, you are free to apply Javascript, CoffeeScript or Dart. For templates you can use either pure HTML or preprocessors like Jade.

AngularJS was originally created to make it easy to write tests for applications, especially if you utilize modules, as recommended in the official documentation.

The view is written along with its logic on Javascript. JSX syntax was invented to facilitate the layout on React. It allows you to write some sort of HTML within JavaScript. Many developers like the fact that the view is not to be separated from its logic.

It is well-known, that the manipulating operations with DOM are slow. That’s why websites with too dynamic DOM have performance issues. React developers came up with "virtual DOM" in order to minimize this problem. All changes in a document are made there first, and then React looks for the shortest path to apply them in a real DOM tree. This approach makes the framework fast.

To make changes in the data view you need to modify the state of the object, and then simply apply the updates.

In fact, React and Angular, like most of frameworks, are created to solve the only one problem - to help a developer organize the logic of data and view changing in an easy-to-maintain, modifiable and scalable structure, and to do it without compromising UX. Let's see the difference in the ways of addressing the issue used by ReactJS vs. AngularJS. 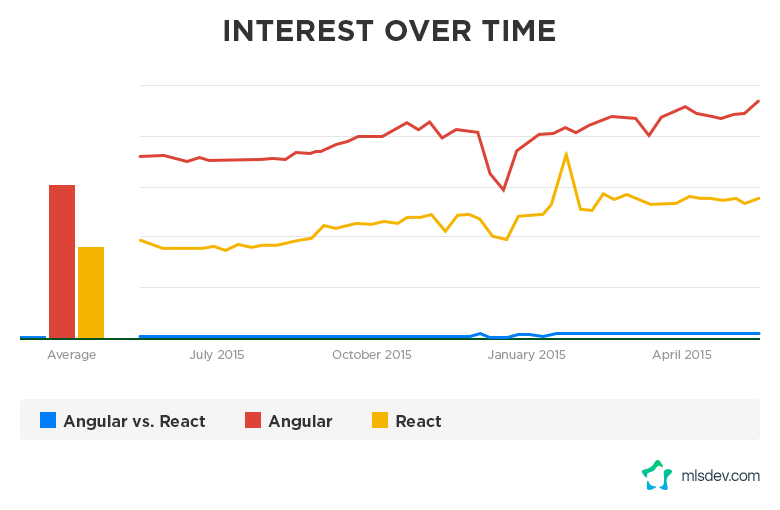 Angular vs. React Interest over Time

As mentioned before, React is not a complete framework. It stands for “V” in the abbreviation “MV”. ReactJS solves the problem of connection between the view and its logic. To describe the logic of these changes in the model and link data modifications in the it with the view, we need to refer to other libraries. React-route is commonly used for routing. Flux architecture and one of its implementations Redux have received the greatest popularity to bind the model and the view.

We will not cover what Angular offers for working with models because apart from the official approach stated in the documentation, we may use Flux and Redux as well.

They create components, which can be connected anywhere on a website and do not prohibit the use of other web components. Nevertheless, if you are going to utilize them within React components, you need to understand that it has a "special" approach to the modification of the DOM tree. It rewrites the entire content of the components, which caused problems with rendering CSS transitions earlier. Angular uses a more classical approach to the modification of the DOM tree. That’s why the bunch of React components within an Angular website can be found much more often than the inverse option.

In order not to impose the learning of syntax of yet other templates upon a user, it presupposes using pure JavaScript or JavaScript + JSX in the template description. In return, you cannot use HTML templates. You will also have to forget about the use of HTML preprocessors. The main argument in favor of this decision is that it lets you not to keep in mind the logic from several files, but it does not seem to be very convincing. Angular allows the use of either a string template or an HTML template in a separate file.

And the Winner Is…

So, if to decide what framework to choose as the main one to develop a website, the choice seems to be obvious. Taking into account our brief analysis of AngularJS vs. ReactJS performance we draw the following conclusions:

Its small drawbacks seem to be an insignificant price to pay for the benefits it provides. Our company successfully develops web solutions for startups with AngularJS.

Do you require a web solution for your startup?

The choice of AngularJS is very reasonable in web development, especially for startups. Our team can help you to implement your web project utilizing this technology.

Rate this article
4.96/ 5 Based on 126 reviews
Lilia Udovychenko

Ruby on Rails vs. PHP: It’s Time to Set the Record Straight