“One lemon, a few sprigs of fresh thyme, two aubergines, two or three courgettes depending on their size and … and it seems to me that is all I need to cook a perfect ratatouille. Oh my goodness, I’ve forgotten tomatoes!”

Have you ever been in such a situation? I bet you have, at least once. And that’s because you left your paper list at home (or maybe someone has stolen those precious notes)? Either way, the thing remains the same: a lot of people come to the supermarket without a shopping list and in most cases it ends up with buying more than it was intended or forgetting about some important items. So is having a grocery list so important?

Let us take a look into history. It seems like people have been using paper lists for ages. The oldest one was found near an old Roman Fort in the Northern part of the United Kingdom. It was written in circa 80 AD and served someone as a reminder to buy bread, pork, oil and wine. But the most popular grocery list definitely belongs to Michelangelo. The great artist wasn’t shopping by himself. He had a servant for this purpose who, unfortunately, was illiterate. That is why he illustrated each item on the list with caricatures in pen and ink. 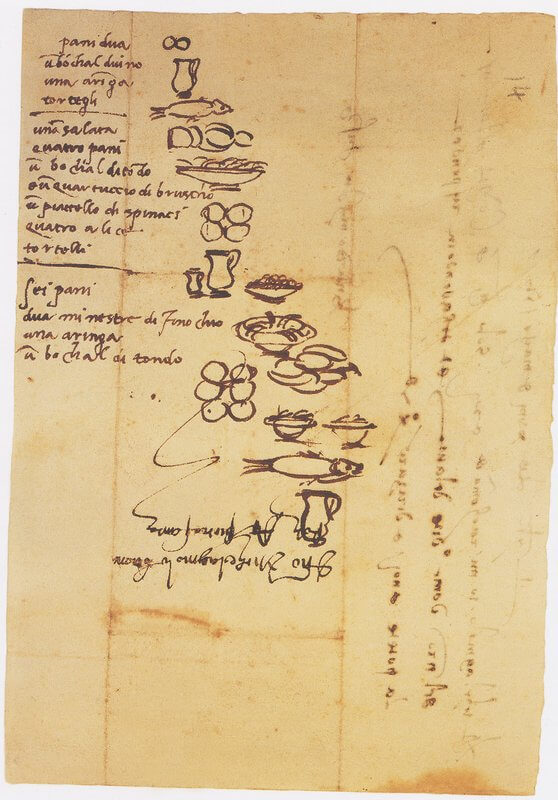 
Easier Way to Do Shopping

At the beginning of 2012 around 90% of Americans used paper lists. But with advances in modern technologies the situation has radically changed.

According to NinthDecimal Mobile Audience Insight Report on how smartphones influence the consumers’ path to purchase, 69% of responders use their mobile devices to create shopping lists, and this number is rapidly growing. 1,200 mobile users participated in the survey, presented by NinthDecimal, among which there were 57% of males, and 43% of females. 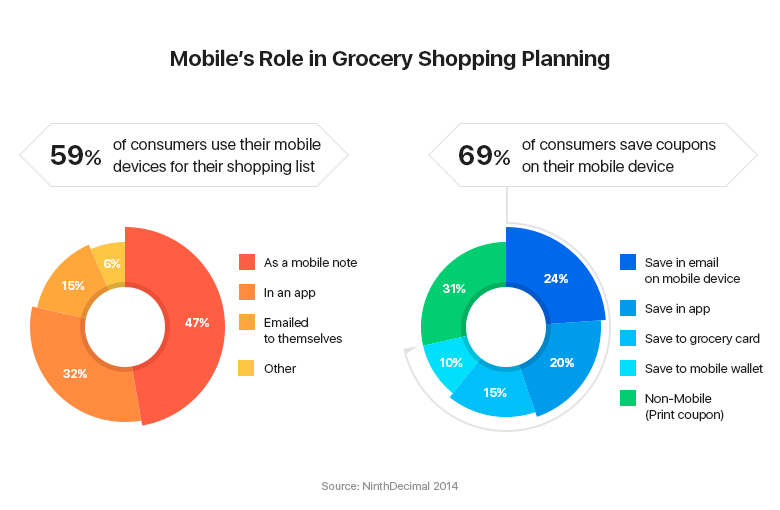 According to it, 68% of consumers use their smartphones to discover products, 86% - to get ready for a shopping trip and 59% turn to them while shopping. 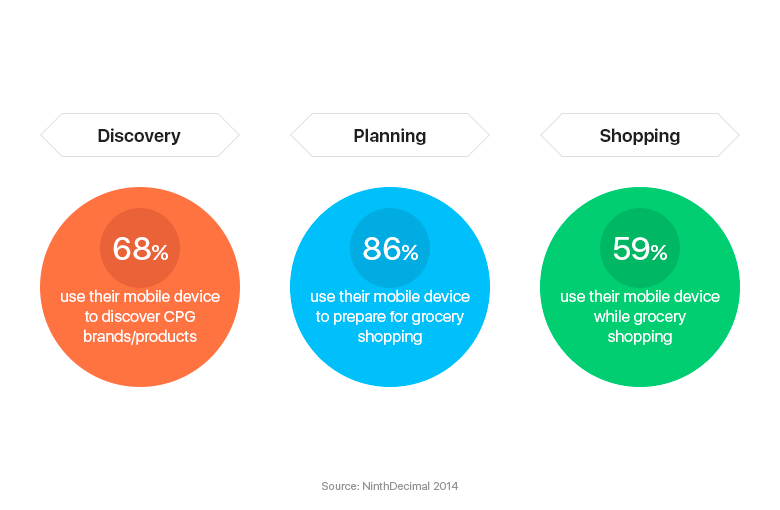 So, that is why a grocery app is a very good solutionю It can offer much more than just list-making capabilities.

From the Simplest to the Most Complex

According to Flurry, one of the best-known mobile analytics platforms, the usage of shopping apps was up on last year by 77%. Together with it, the time users spend in shopping apps increased by 174% as compared to 2014-2015. This gave rise to a great variety of grocery list applications. Almost all of them can be divided into several categories based on the perks they offer.

These are easy-to-use basic list-making apps which can replace your old paper lists. They usually have a simple and intuitive interface and built-in dictionaries suggesting items to easily enter what you want. To make shopping even more efficient some of them include barcode scanners and list sharing for you to provide your family members with access to your grocery notes.

The best example  of a shopping list app here is definitely “Out of milk”. It also helps to build pantry and grocery iQ, which suggests brands as you type. The app has coupons (powered by Coupons.com) that users can print, send via email or simply link to their loyalty cards.

Savvy shoppers want not only to organize their shopping with the help of a grocery shopping app but also to find a more creative way to save money by participating in various loyalty programs.

A good example here is Ibotta app which, apart from providing an ability to create lists, returns money for shopping. Its algorithm is not the rocket science: first users should unlock cashback rebates and then scan or take a photo of their receipt. Once they link their loyalty cards they get money back within 24 hours. Besides, it covers not just groceries, but all kinds of products.

Another example is Favado app, which provides users with all best sales within their area and allows comparing discount prices in local stores.

A grocery shopping list app which combines list-making capabilities with a recipe book is another popular type. Good examples of such kind of apps are Yummly and AnyList. Just imagine, Yummly allows not only checking hundreds of recipes and adding the ingredients from any of them to your list but also suggests related recipes according to the items you plan to buy. Besides, it automatically categorizes a shopping list, which helps to make a trip to the store faster and more efficient.

In addition to typical shopping list app functions and built-in recipes, AnyList also has a meal planning calendar which helps to plan your diet for an entire week or even month. 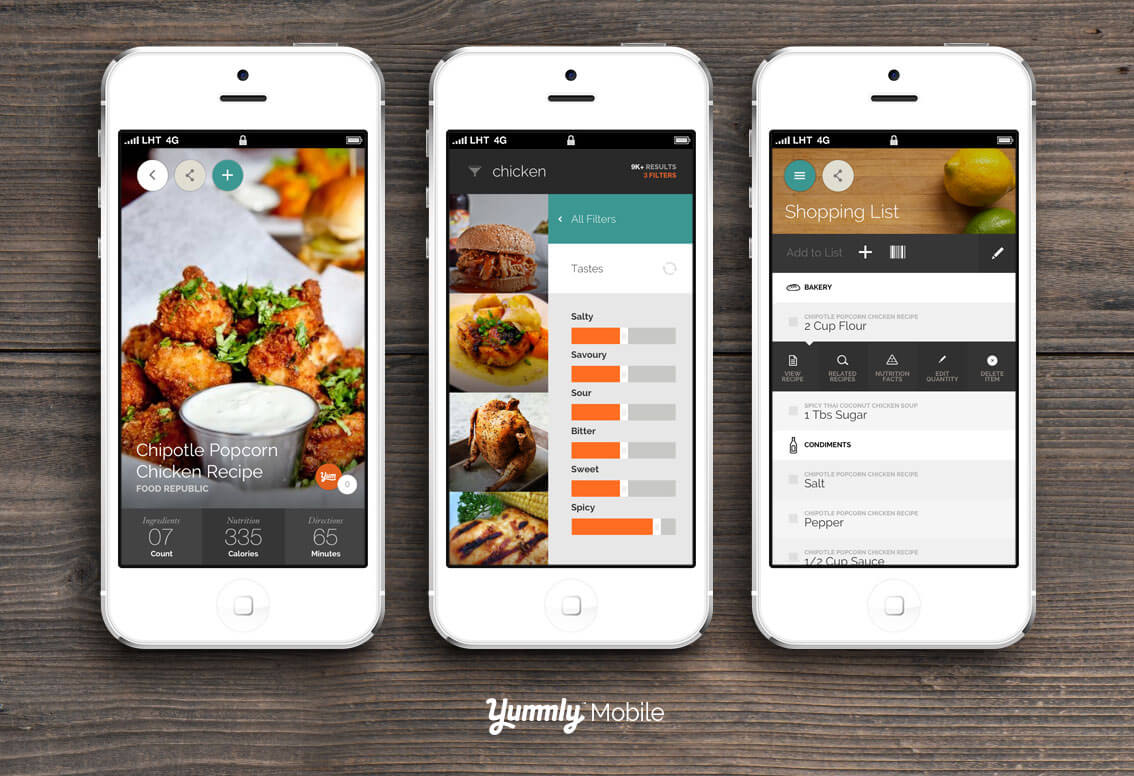 Such kind of apps can become your good friends and advisers as they offer not only standard functions but also give useful suggestions and tips, assist in controlling spendings and help follow your diet.

One of the good examples of such smart shopping list applications is Listonic app. The company acknowledges that approximately 70% of products on an average shopping list are recurring items. So, if you are a hopeless sweet tooth and cannot live a day without sweets the app will probably suggest that you should buy candies first :). It also makes your shopping easier with smart sorting on the lists according to store aisles.

There are also shopping list apps which are specifically designed for shopping in a particular supermarket. They show all hidden sales, coupons, and best deals, can calculate your expenses once you start making a shopping list, suggest recipes and even offer faster pickup in a store by checking in with your device first. Good examples of such apps are definitely Whole Foods and Walmart which provide great deals throughout their retail chains.

Unfortunately, the famous artist Michelangelo didn’t have a possibility to check the variety of shopping list apps, but if he could, he would have definitely emphasized their convenience.

How Much Does It Cost to Build a Shopping App?

It should be also possible to use an app without registration. But to be able to synchronize lists on various devices or to share them with family members or friends, users should have an account. Facebook login or registration via email can work pretty fine for the first version of the app.

When it comes to the menu, there are several options on how it can be introduced to users in a shopping list app. It can work as a start screen or can be provided in a tab bar (more common for iPhone users) or in a side menu.

Being a core feature of the application it definitely should include:

Auto-suggestions of items can be very convenient especially for “typing on the go” users.

The ability to share lists makes shopping with family members and friends much easier as it allows you to instantaneously see list updates made by others.

Push notifications informing users when someone has shared a list with them, updated it, started or ended shopping can facilitate synchronization and make the process more efficient.

In order not to be overloaded with various lists, it is good to be able to archive old ones but still have a possibility to check or reuse them in the future.
Once all these mechanics are thoroughly described in functional specifications the next step is to create UX/UI design and then proceed smoothly to development.

In the tables below you can find a rough time estimate for shopping app development for one platform.

Please note that if you would like to create custom design with interesting transitions or animations it can take more time both to make and to apply it. 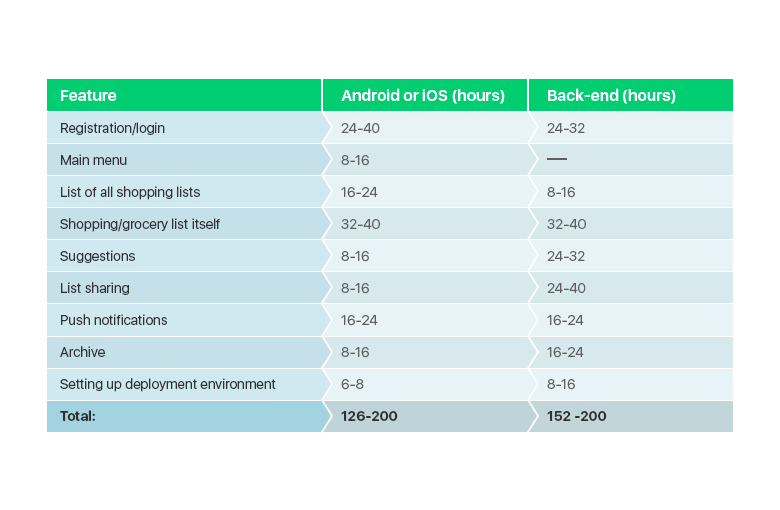 The cost required to make a shopping list app for IOS or Android (that’s for a single OS) can vary greatly depending on whom you’ll hire, a technology approach (native/hybrid) and of course, on the scope of work. Roughly speaking if you follow the lean approach (which is a preferred one for startups) the price for building an MVP version of a shopping list app can be between $10K - $15K (by $30/hour) and $15K- $25K (by $50/hour).

A lot of companies have a feeling that their shopping list app will be a howling success if it has a great deal of functions. But very often this is a far cry from reality. According to FMI Study, most users value simplicity. So, creating an uncomplicated, easy-to-use app with sleek design and some elements of artificial intelligence can be a step in the right direction for your business.

There is not a plethora of grocery shopping list apps in both Google Play and Apple App Store. A lot of these solutions have really poor design, overloaded with functions, only available in one language or simply outdated.

Do you want to create a shopping list app for Android or iOS?

You have nice chances to gain success and our team can assist you with its implementation.

A simple shopping list app with a clear design is always better than one overloaded with functionality and screaming colors.

Rate this article
4.99/ 5 Based on 470 reviews
Lilia Udovychenko

How to Make an App Like Uber: Complete Guide

How to Create a Social Media App